Hi, I’m Kuromet, who went and bought all of Misuchiru’s albums until SENSE. (TN:If that makes any sense…)

With all the rain until last night, the melting of the snow has progressed at an aggressive rate. 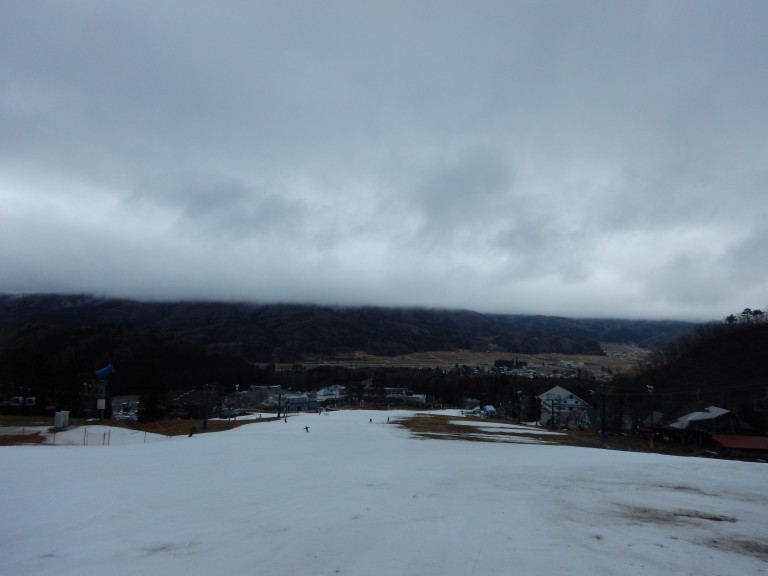 The slope from two days ago was completely different and,

The white surface of the Toomi slope has significantly reduced in scale and,

The Dynamic and Woody courses are practically just one thin later of snow with areas of ground popping out here and there.

With the granular snow, skiing is still fine but, the areas that you can ski on have thinned out…

The water gushing down the dams by the side of the slope tells the story of yesterday’s large rainfall. 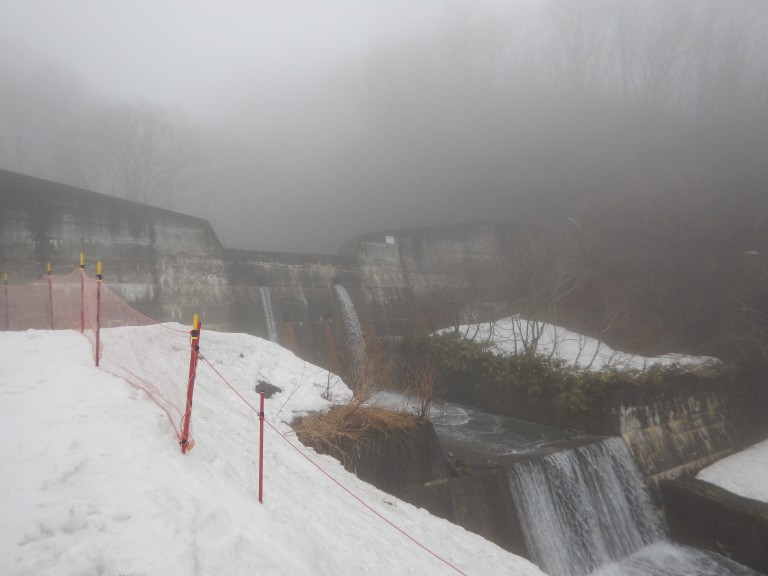 If we happen to see the water turning brown, then we need to close off the ski resort due to the potential for avalanches, but that wasn’t the case today.

Though there was a little snow slide off the hill by the Woody course. 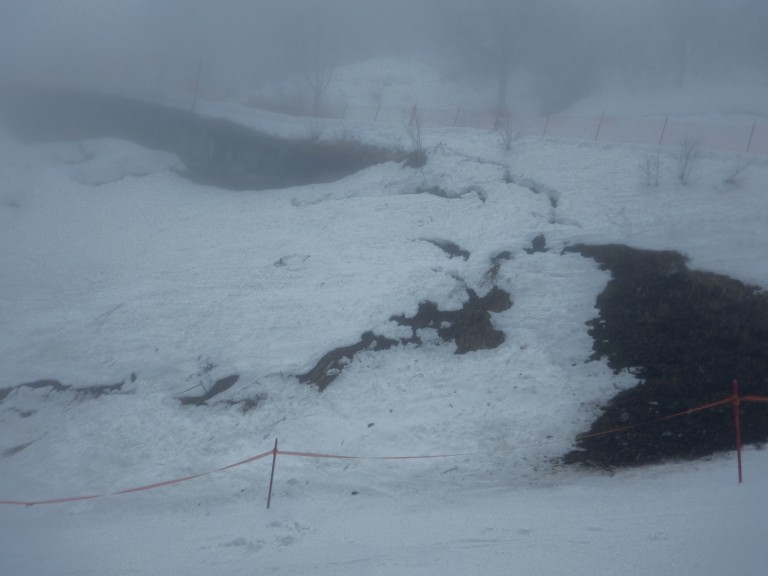 You can tell what happened by comparing these two photos taken in the morning and afternoon. 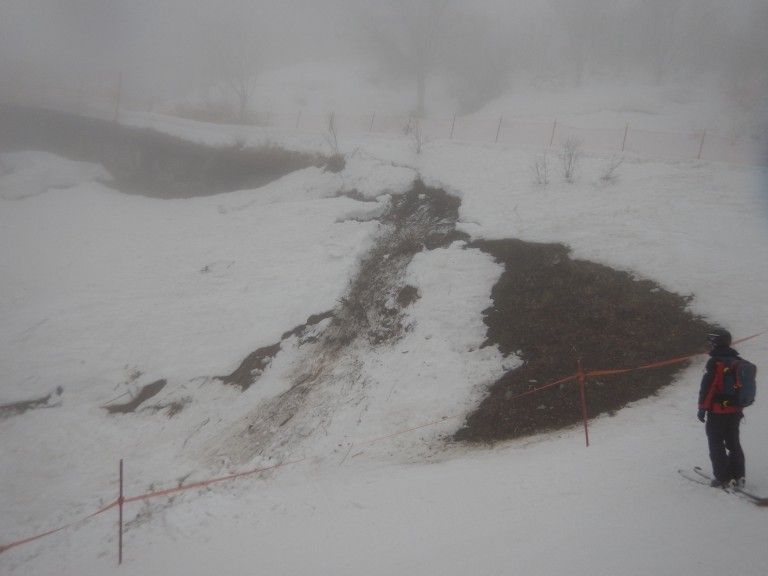 A small scale avalanche had rumbled down the hill.

Hoshiimo who wasn’t used to the sight was rather surprised.

This year, the snow may not be very thick but it still doesn’t change the fact that its dangerous if you get hit by moving snow.

Thus I wouldn’t recommend stopping above steep areas with snow.

We’ve fixed up the area by the Woody slope though, so please feel free to continue using it!

Again, with the melting snow, the entrance to the Woody course is rather slimmed out. 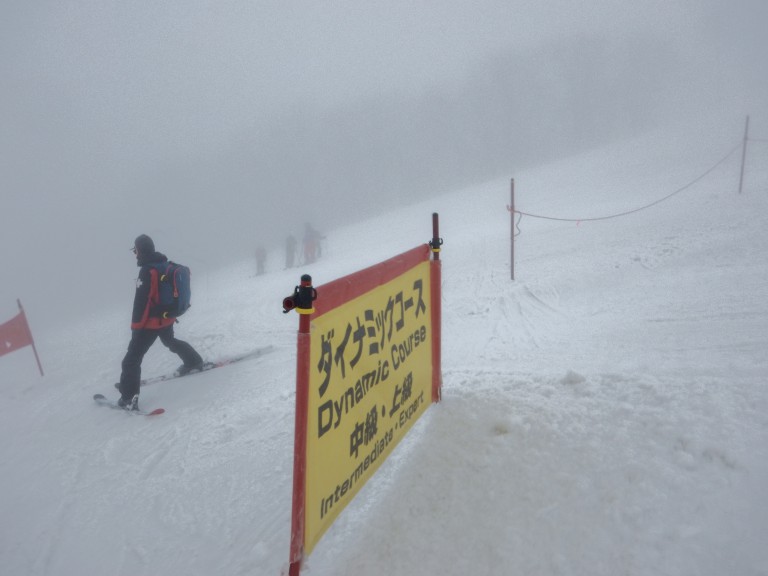 You can still descend the mountain without any interruptions, its just that the course conditions aren’t the best.

We do recommend descending the mountain with the gondola.

Now, some may have noticed from the photos shown up until now but, today’s visibility is quite poor, so there are times where one might get lost. 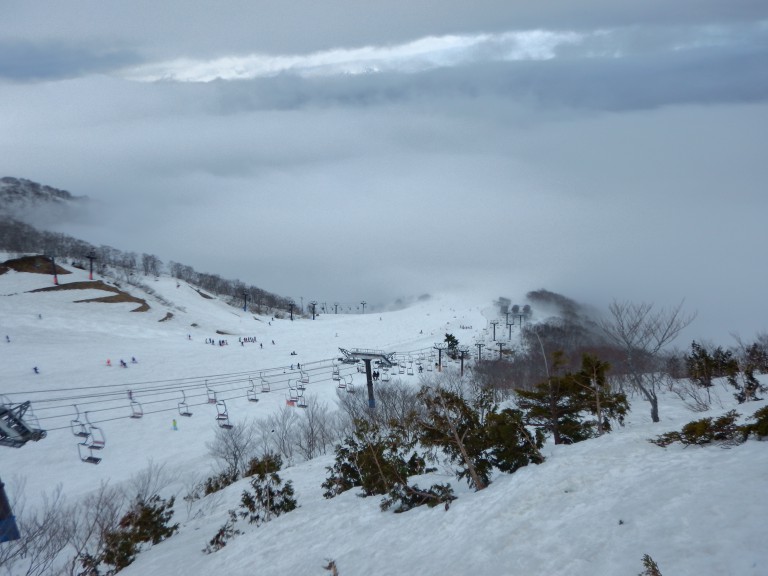 There are times where visibility returns and you can see across the slopes, but it never lasted for too long. 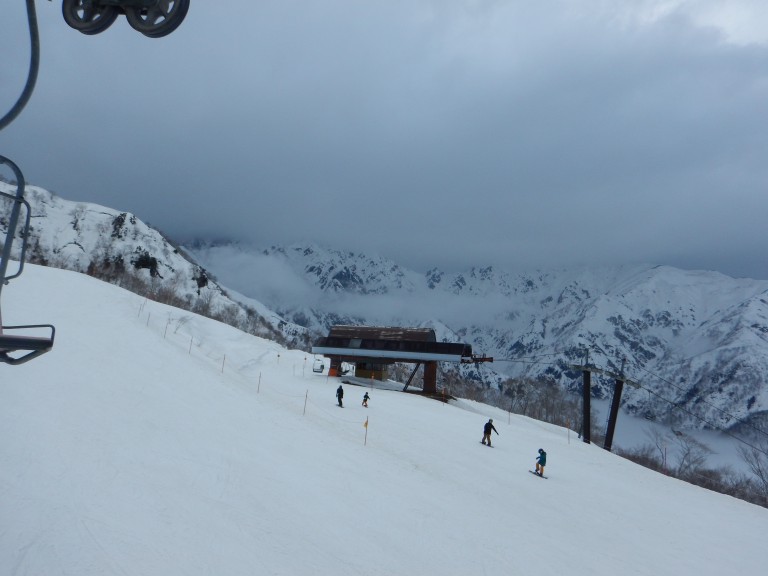 For those who took the time to come to Hakuba, its a shame that there were only a few chances to see the back of the Tateyama mountian range.

Even despite all the lack of snow, the Alps Daira are still easily skiable. 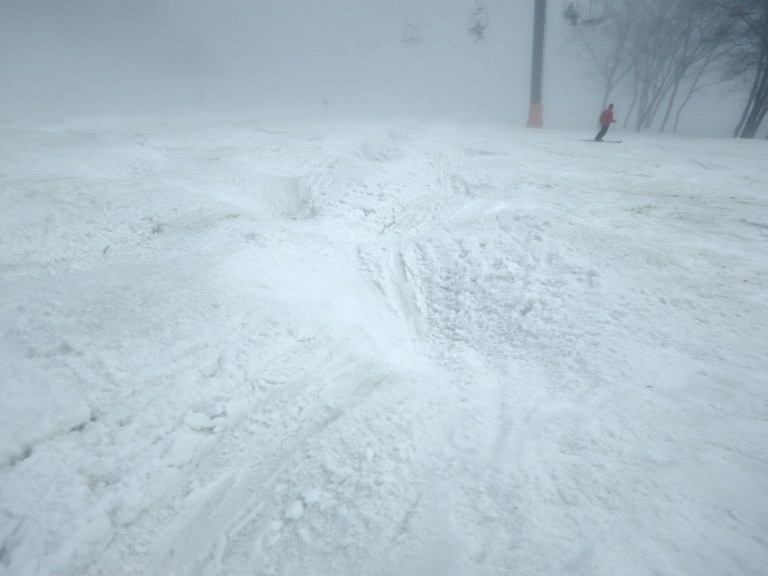 There are many enjoying the Spring snow style moguls.

Its just that, Spring snow can be quite heavy, so you can become tired rather quickly, so make sure to take breaks to maintain stamina! 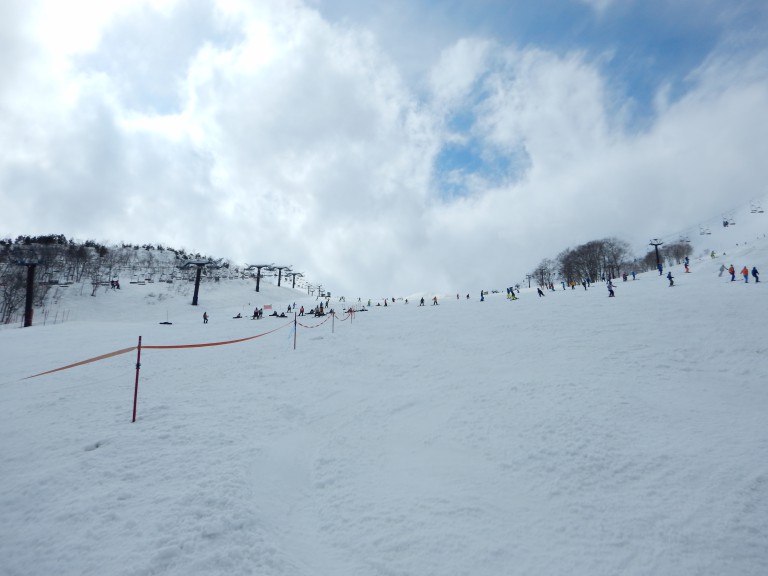 OK, so I’ll end with an announcement and a small request.

There is practical snowboard testing being held in two areas of the Grand Prix course, so those areas have been privately reserved.

It may be a little inconvenient, but please try to avoid these areas.

With the snowfall from last week, the slopes had recovered, but we are back to the thin layer of snow from before.

Buuut…just like it has been throughout this season, we have a snow forecast at the perfect possible timing!

(To me, this season has been like a seesaw game between lack of snow and good snow conditions.)

However, this time we are unsure about how this forecast will play out in the end.

Now! Lets hope that the amount of snow that will fall will be enough to lift the seesaw! …so stay tuned.