Good evening. It is MachaMachaDonDon. 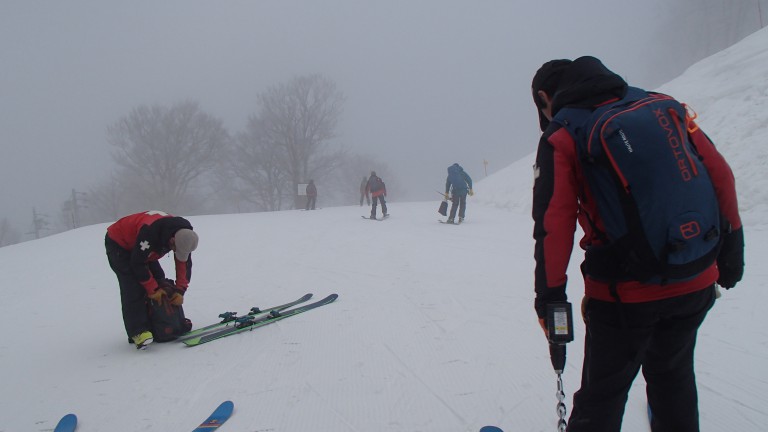 After the big storm that happened during the 3 day weekend, Goryu is starting the day covered in fog.

With a big breath, we started morning preparation.

It is almost the end of March.

I felt a bit sad when looking at my team from behind. Just a few more days before we all part ways…

We started working a bit late today. It was not like we planned to start late, nor that we started late because we didn’t want to do the very important ( and not boring at all) net setup, but because I got so emotional watching the backs of my colleagues that I took too much time to get prepared. 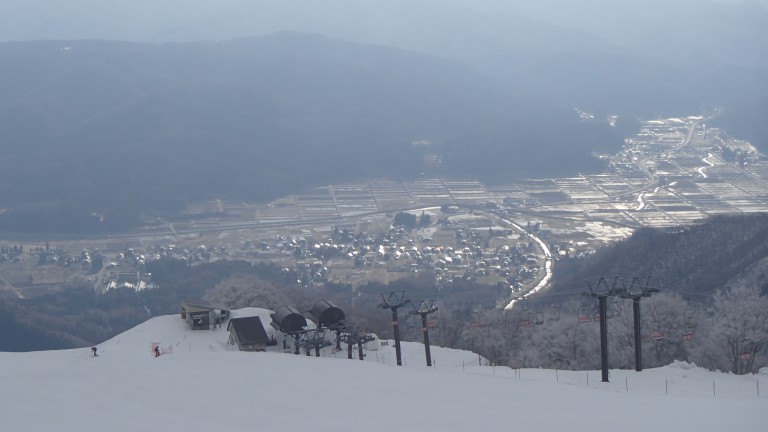 The surface of the snow on the Alps Daira was so hard, my super good quality skis were still not enough to grip the snow properly.

I was so nervous at every curve that I felt like I might end up flying into the glittering river below if I ever made a mistake carving.

I was focused on my camera as I felt a sign that weather will get better soon.

At the same time, I felt the despising glare of my coworkers which said ‘Get back to work Matcha’. 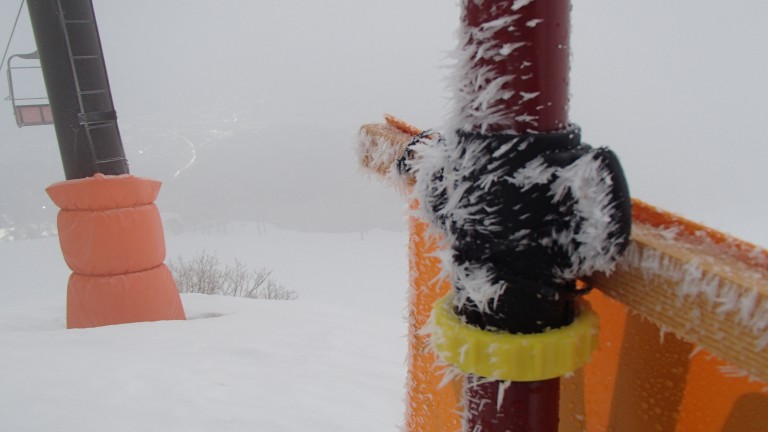 Look at how beautiful the frost is. It will never be exactly the same twice.

As I was clearing away the frost on the panel, I was thinking that the temperature was quite low today. I didn’t have any idea because I forgot this morning’s weather forecast.

The least I could say for sure that today’s snow condition will be better than yesterday’s.

The weather was very unstable until yesterday though.

We experienced every type of weather during the 3 day weekend. 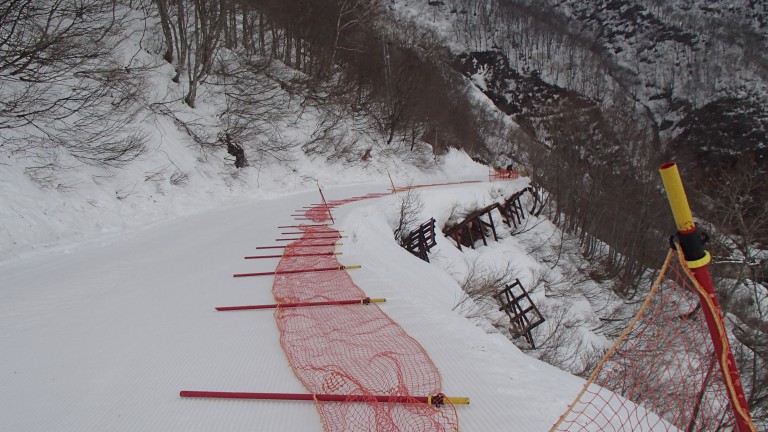 As I was daydreaming, I was also humming songs while skiing when BAM… I bumped into Woody Course’s net.

I grumpil- I happily set the net. It was clean, just like it was before! 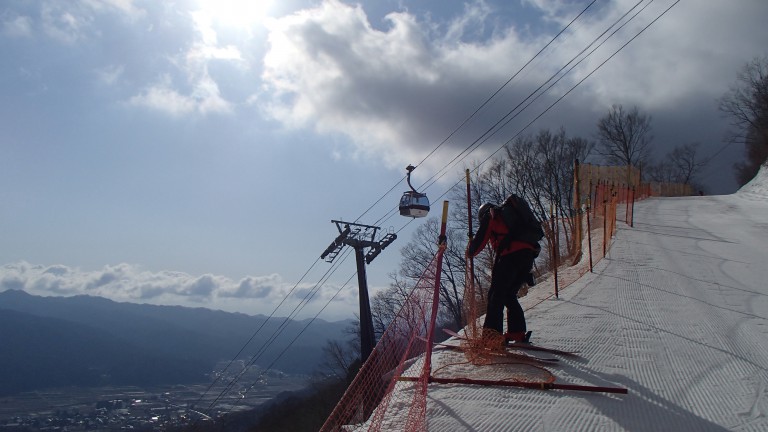 After finishing my duty, I skied down the course to meet PINKY, who was earnestly setting his net.

“Hey, your so great at setting up nets!”, I told him while taking his picture.

But I was coldly yelled at by PINKY, “Macha, go to the B curve area to set up your nets already.” 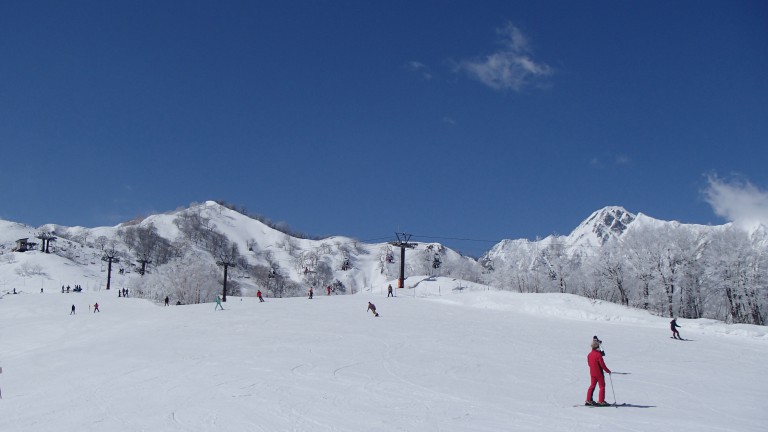 After morning preparations, when we arrived in Alps Daira,  the fog wore off to reveal a beautiful blue sky and white snow fields.

Compared to Sunday’s sky, it was so bright that is was dazzling.

Compared to Saturday’s temperature, today’s was so low that it was cold.

Compared to Friday’s tempest, we didn’t feel any wind.

I finally managed to take photos of the ‘Awesome’ Alps Daira on a perfect day. 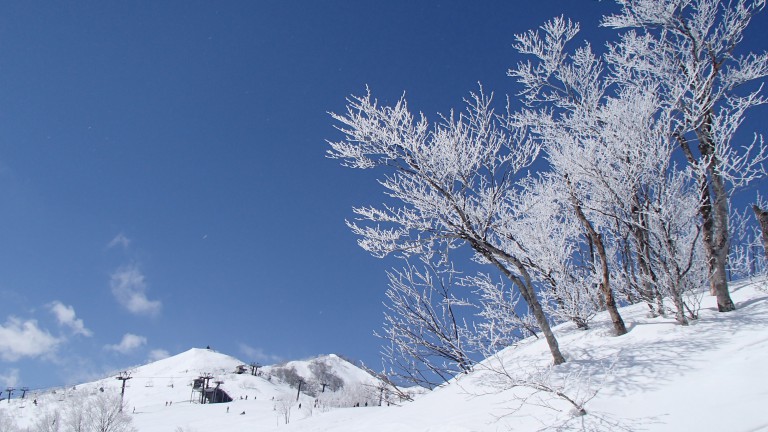 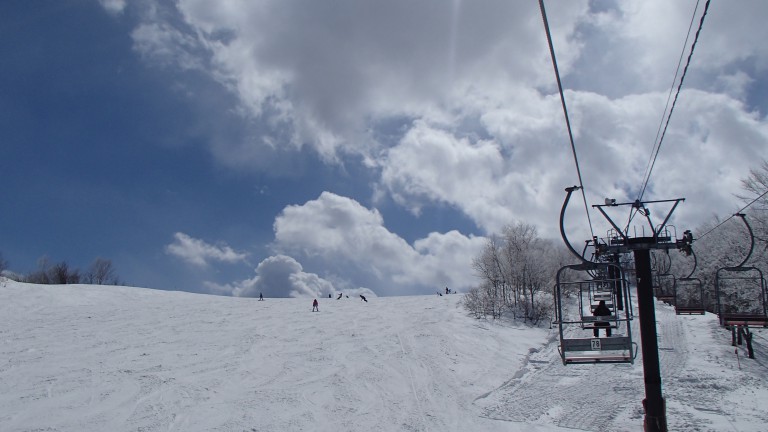 It really is beautiful.

It has become rare to see such scenery recently.

Even the casual scenery we got used to seeing every day, the moment we notice that we won’t be able to see it anymore, it suddenly becomes dear to us. 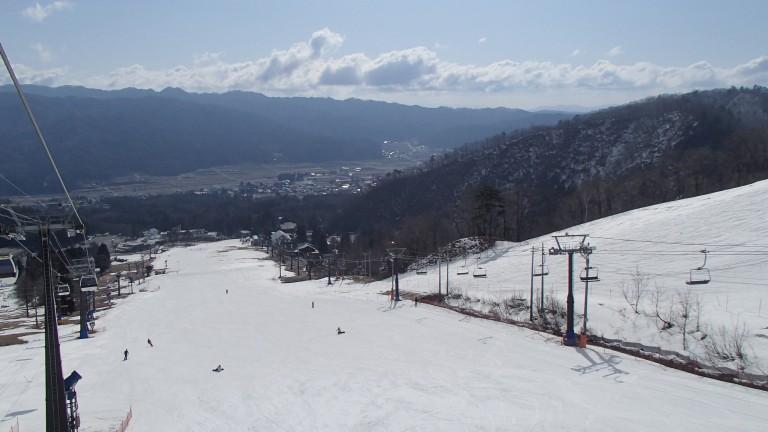 The Toomi slope has been going back and forth between life and death for a long time. But today, the snow melting speed finally slowed down. 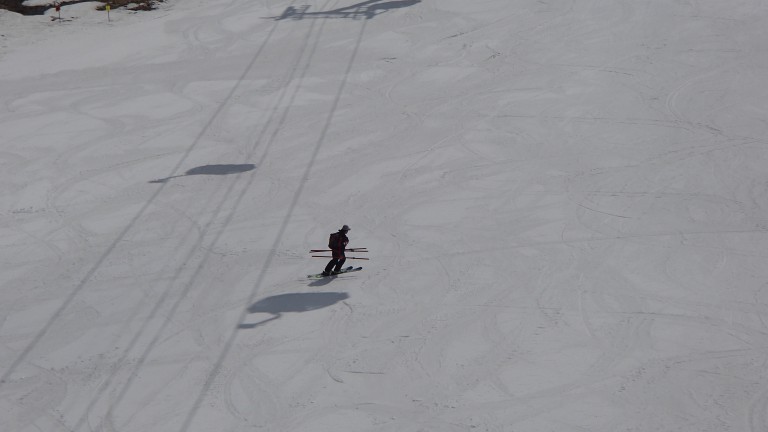 Unfortunately, it is impossible to hide every hole and terrain. Here is a patrol member setting warning poles all around the Toomi slope. 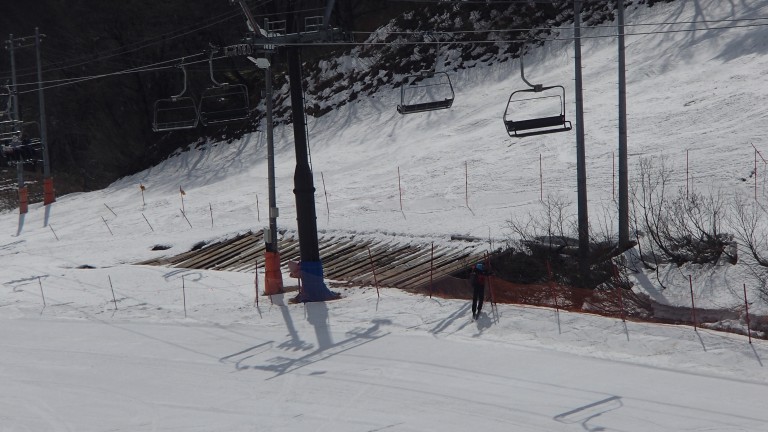 Here is an other one thoughtfully fixing the net.

After looking at my coworkers working, I headed to the gondola. 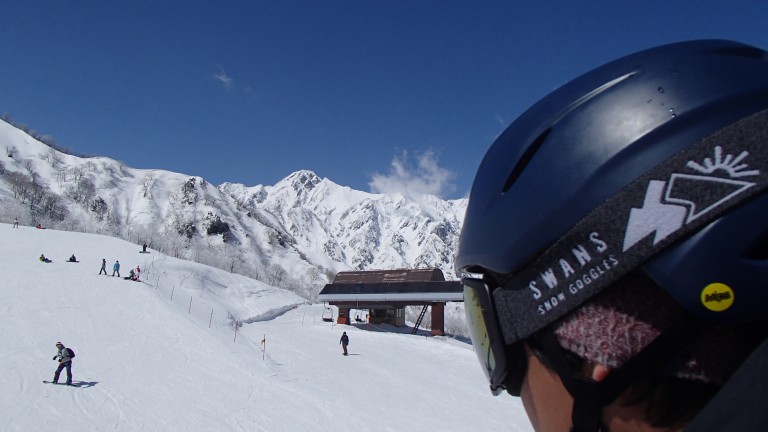 The young patrol member who came patrolling with me also got nostalgic of the patrol life seeing how few days are left.

I didn’t miss the opportunity to catch the moment when his goggles’s band aligned with the mountain behind. 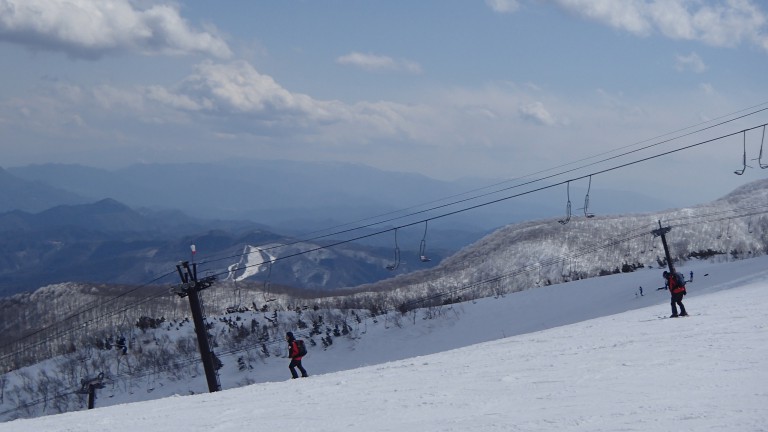 When looking at the other side, Hacchaku and Imo were patrolling.

I was so busy today bringing in and out my camera to take photos of every patrol member I met.

After taking pictures of guests, beautiful scenery (and also patrol members), make sure to fasten up your wear correctly! 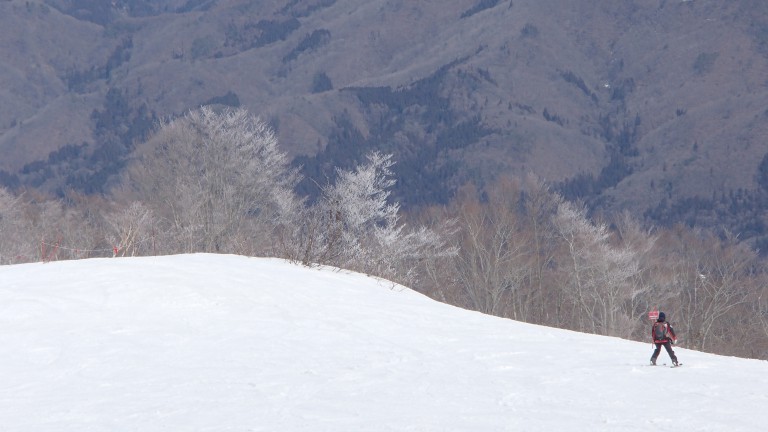 The snow finally comes out at the end of March. Isn’t it a bit too late?

It may only be 10 cm of snow, but any amount will be great for the slopes.

And the day after tomorrow is expected to be the worst. Either cloudy or foggy…

Nevertheless, we have to enjoy the few days that are left!

Who knows what could happen in 100 days? Nobody, neither man nor crocodile do.

Let’s be positive! As long as there is snow, it is important to cherish every day and keep skiing despite the rain, the speed snatching kind of snow, the yellow sand or the pollen.

On to the afternoon rope training with professor Kanreki.

This rescue method is pretty rare, but we have to continue training for that fateful day.

A simple mistake in a real situation can cost a life.

You can see I get serious from time to time.

My coworker was so kind as to capture my seriousness in this picture. “Macha, you have good techniques, but you have to correct this, that, those and these! You have to improve more!”

“You are right, Kanreki. But during my training, I imagined a situation where I do this and that, which lead me to do these…”

“I see what you mean. But you have to correct this, that, those and these! You have to listen to me and improve more!”

“You are right, Kanreki. But…”

My ego was a bit hurt today… 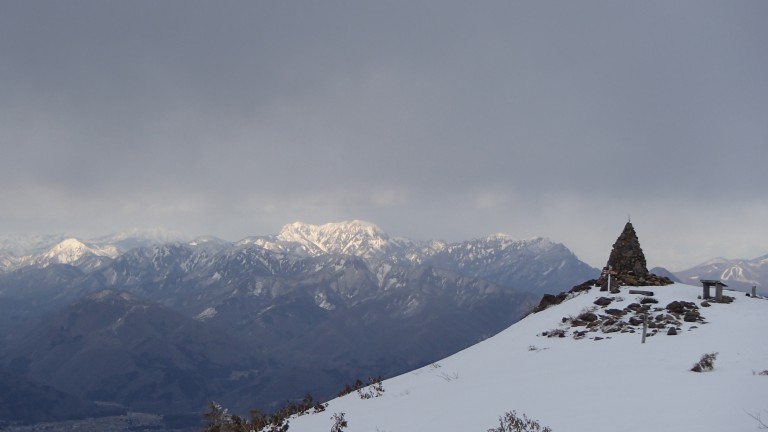 After that little spat, I decided to climb the Jizo for some training, and to clear my mind.

The flat mountain in the distance strongly resembles Kangkar Pünzum, a mountain on the border of Bhutan and China.

As I climbed the Jizo in one go, so I felt light headed.

I was so lightheaded that I was having spiteful thoughts about a certain moriatama squad member; in probably what could called a ‘climber’s high’, so I said my farewells to the Jizo while out of breath and started off back down the mountain.

Suddenly from behind I thought I heard- “Matchaa. You have to correct this, that, those and these! You have to listen to me and improve!” so MatchaMatchaDonDon descended the mountain as quickly as possible. This is a photo of the last guest of the day.

With all that’s happened, its strange to think that our job as patrol members will be ending in a week.

Our job will soon be fulfilled without regrets.

Also, lets make sure not to get hurt and enjoy our work.

And, the younger members should set up the nets more.

And, I should climb the Jizo more assertively

The slopes close in 44 days.

We are aiming for everyone’s safety as our priority tomorrow!