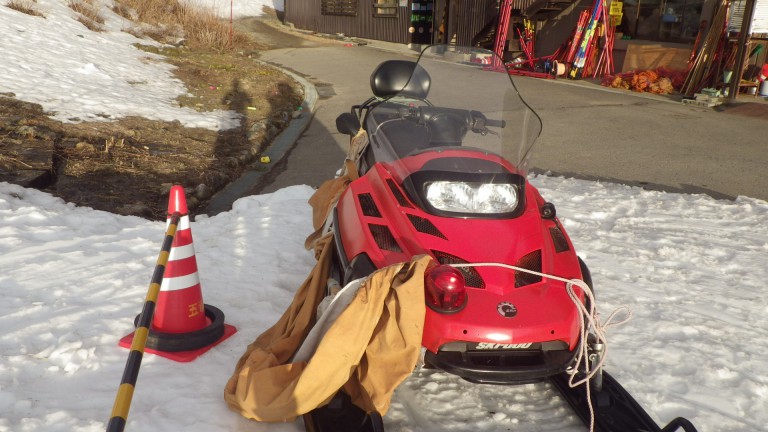 The cover has been blown off the snowmobile from the massive typhoon last night.

Even the winds at the bottom of the mountain were strong.

I’m really glad that I properly tied the rope to the snowmobile yesterday!

When heading to the Alps Daira, you would enter into a thick fog.

Also, due to the strong typhoon, all the snow was blown off the slopes, leaving them icy. As a result, we had to recommend that only advanced skiers take the course down the mountain.

According to the snow grooming squad, there were winds blowing over 30m/s last night… 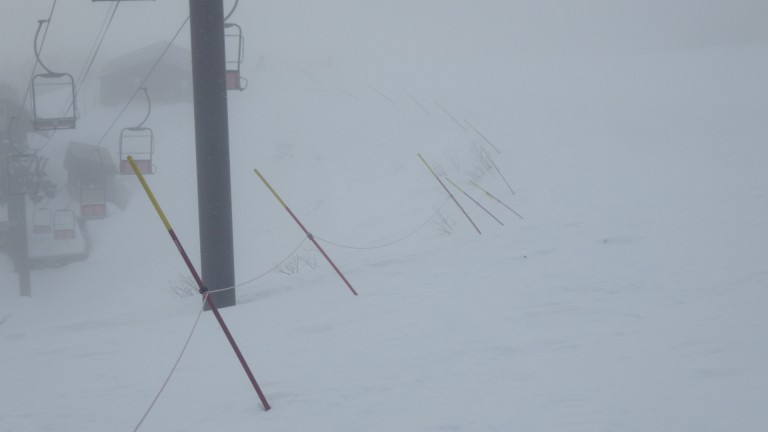 At least they didn’t get completely blown away.

The nets were twirled around in a weird way. 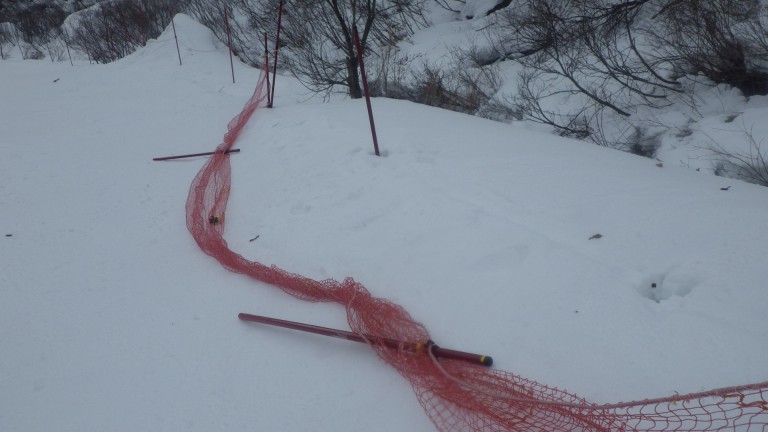 It looks like it was trying to dive into the nearby river to catch some fish all by itself.

But it seems they were unsuccessful in their endeavour.

I’m sure there will be a time when you are all resting at home or drinking at an izakaya, but during these times, please try and remember the poor poles and nets that fought relentlessly against the strong winds.

And also remember that even if the temperature is a little higher than usual, it will still be cold without a coat.

I’ve heard a rumor that for every m/s of wind that blows, the temperature feels like it decreases by１℃.

So even if the temperature is at０℃, it will end up feeling as if its －３０℃.

After taking the poles out of the net, this is how we set it up. 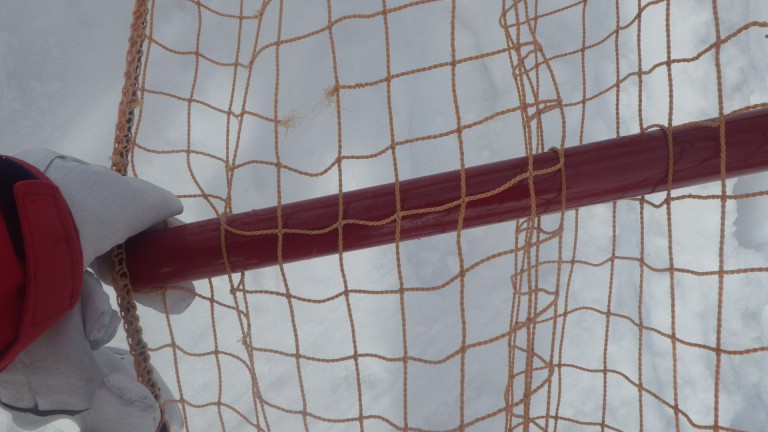 There is a rule for inserting the pole into the same row of the net, and it looks something like the above.

Once you’ve become a veteran, you can set up the poles like this with amazing speed.

But I’d say that @Hacchaku has a hard time with this one.

So when I’m there struggling, Kanreki-san tells me,

“Even a cow could do it faster than you!”

which does make me go faster, I’ll have to admit.

The wind also blew a lot of branches off the trees, so the woody course looked a lot more like a forest path than usual. 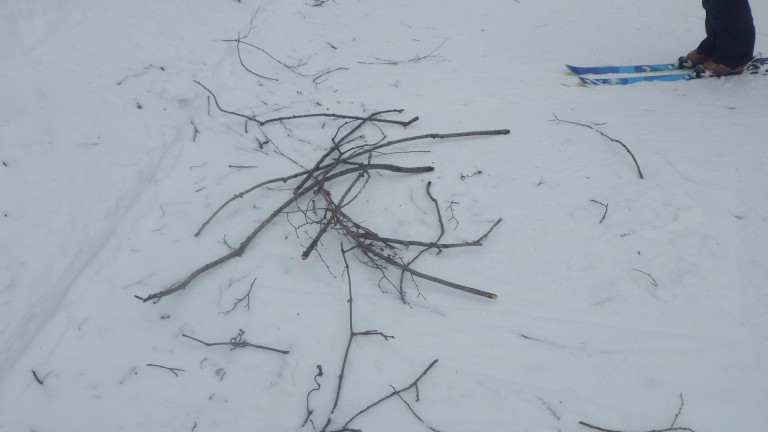 If left alone it would end up looking like an animal trail, so we took the liberty of removing them. 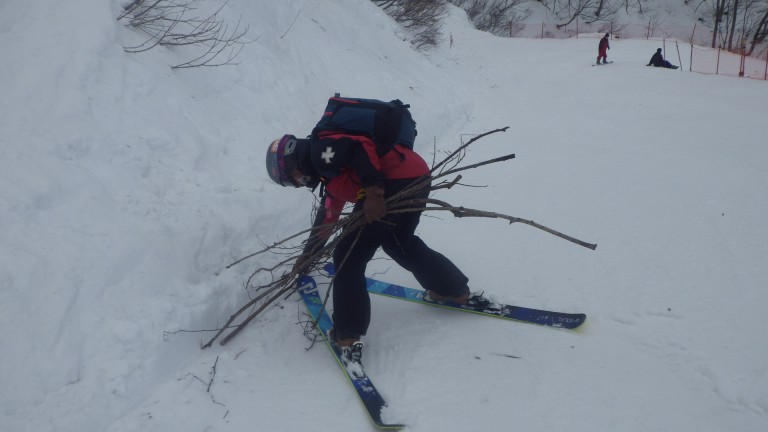 We were able to collect a lot with our large hands.

During our patrol run, this man managed to snag a big one! 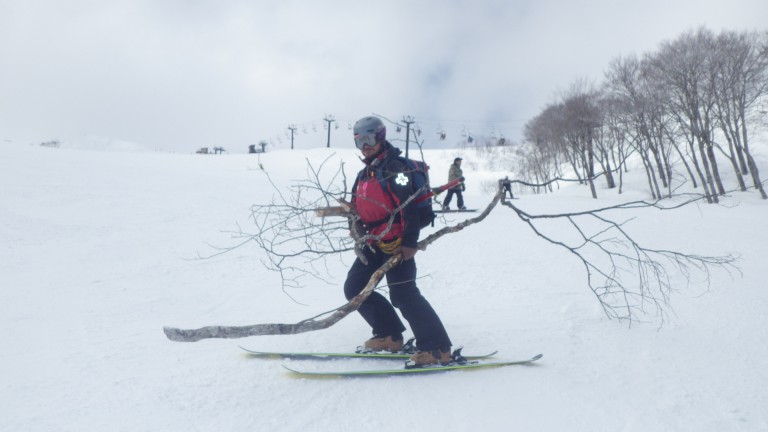 “You didn’t just pull this tree out of the ground right?”

The fact that something like this would fall to the ground is surprising in itself, but whats more surprising is how he could carry it so casually in one hand and ski down the mountain.

All this work has made me hungry!!!

This is my lunch box after coming back from patrol. 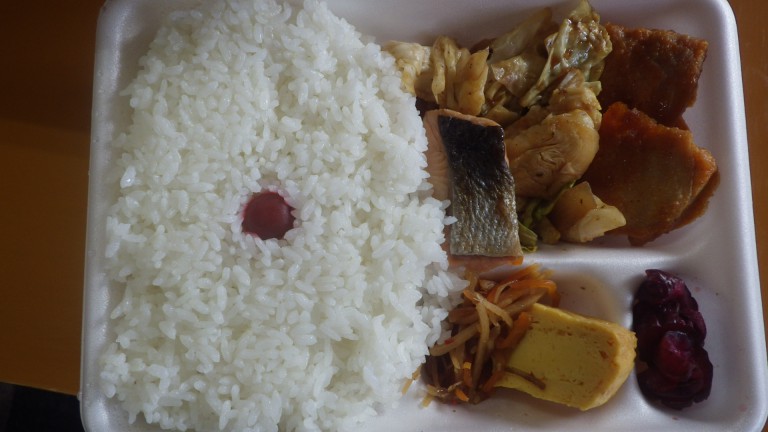 Its been a while since I’ve shown off my bento (lunch box).

The chicken had been flavoured with curry, so it went well with the rice!

After eating my fill, I headed off for another round of patrol!

Even in the afternoon, the top of the Alps Daira slopes were icy.

That may have been the cause for there being a few more people than usual on the Toomi slope. 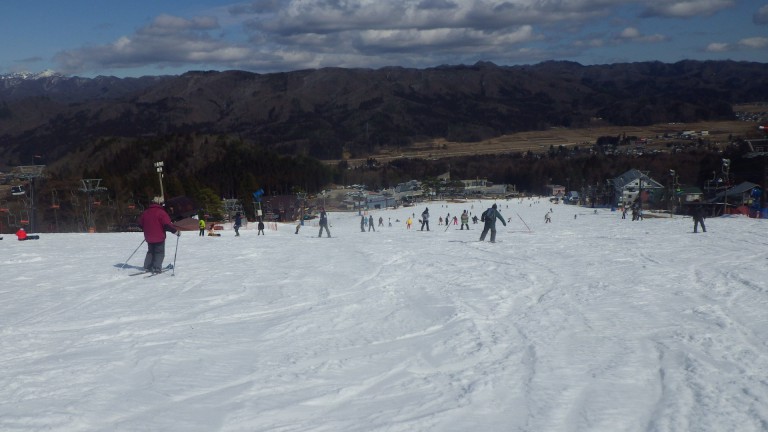 The loose spring-like snow is actually rather easy to ski on, and can be quite interesting!

We can’t have too much snow melting on us, but I still can’t help but enjoy slightly melted snow.

I think that most people think the same! 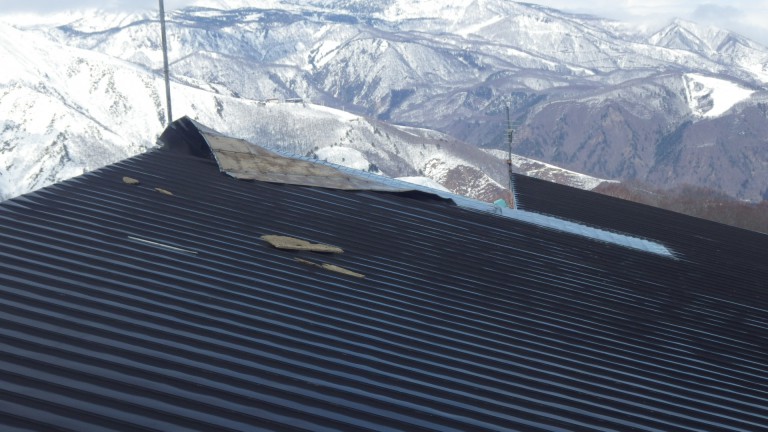 Matcha-san has eyes everywhere, so he was even able to see on top of the roof!

Yes, you over there who has come over to visit! You are also certainly being watched!

But really, the wind is a scary thing.

But the manager of the gondola just went ahead and fixed it.

He can do anything, that guy…

With all things said and done, despite it being a day where everyone was being blown away by the wind, I was still able to take this wonderful shot and the end of the day. 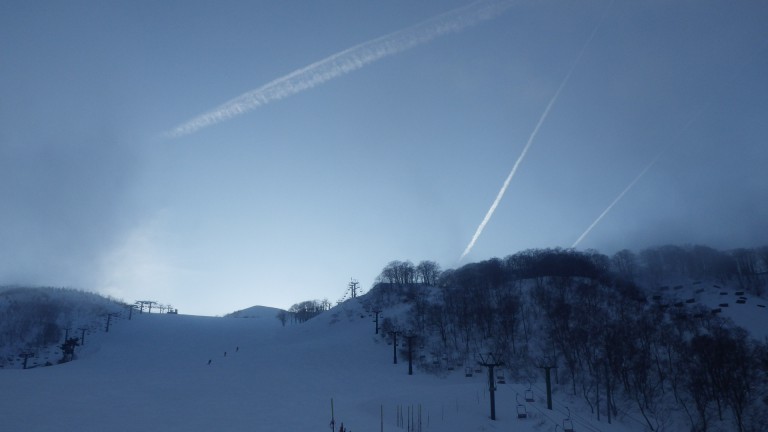 For everyone who was able to see this view, I believe that tomorrow will be a good day!

So lets all meet up at Goryu again tomorrow~