Today was not supposed to be sunny, but since early in the morning, I was welcomed by a clear blue sky and the morning sunrise.

I was doing my everyday morning jogging when I remembered Macha’s blog post and thought to myself.

” If I raced against an antelope on a steep mountain, who is going to win?”

Of course I can’t win, how silly!   Hello everybody, it is Hoshiimo! 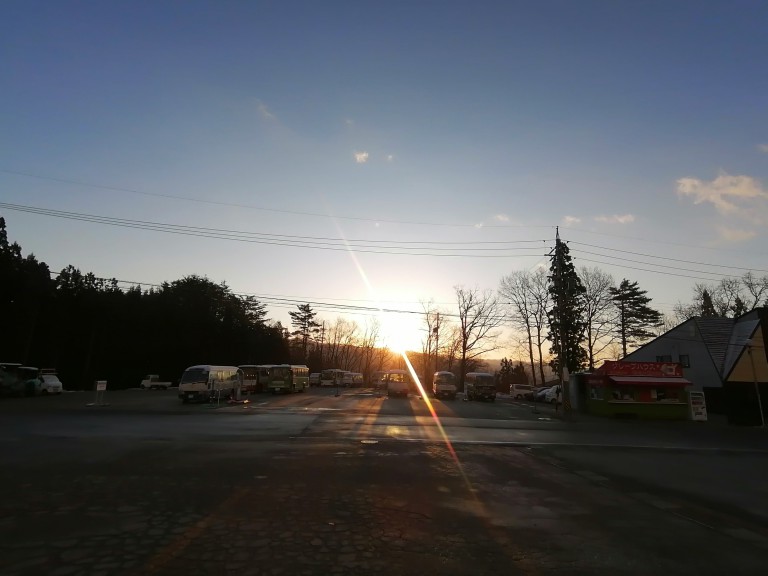 The sunrise in front of Escal after 6 o’clock in the morning. I faced it with a big “good morning!”.
It is great to see you Sun, but please don’t warm the planet to much today… I thought to myself, then began my jogging. 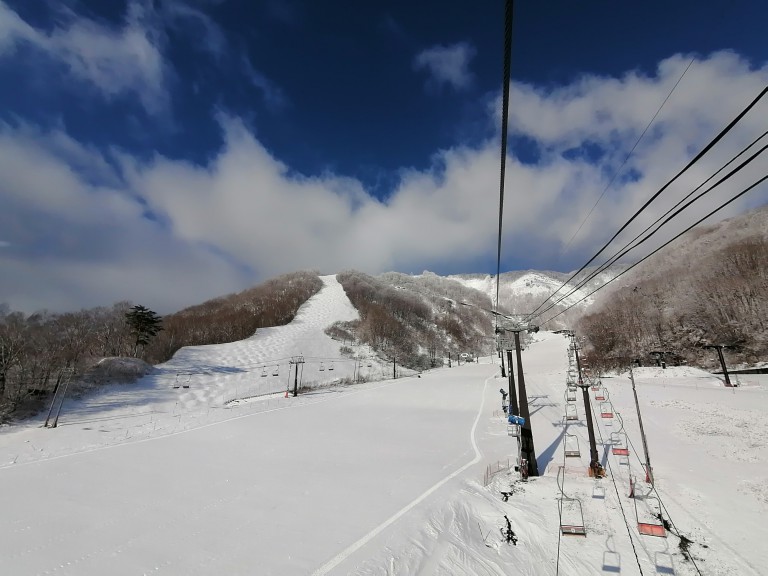 How beautiful! Pure white snow was covering the slopes early in the morning.

You may not know this but, on the 9th the temperature rose to 20 degrees, and it rained all day on the 10th. Hakuba Goryu ski resort was suffering until now.

Rocks and terrain was popping out everywhere. The thin layer of snow was somehow enduring but one punch would be enough to break it.

It snowed once in the past couple of days, but only for 1 cm of snow. In then end, the snow covered the visible terrain and made the slopes more dangerous than it already was. I would rather it not snow in small amounts! 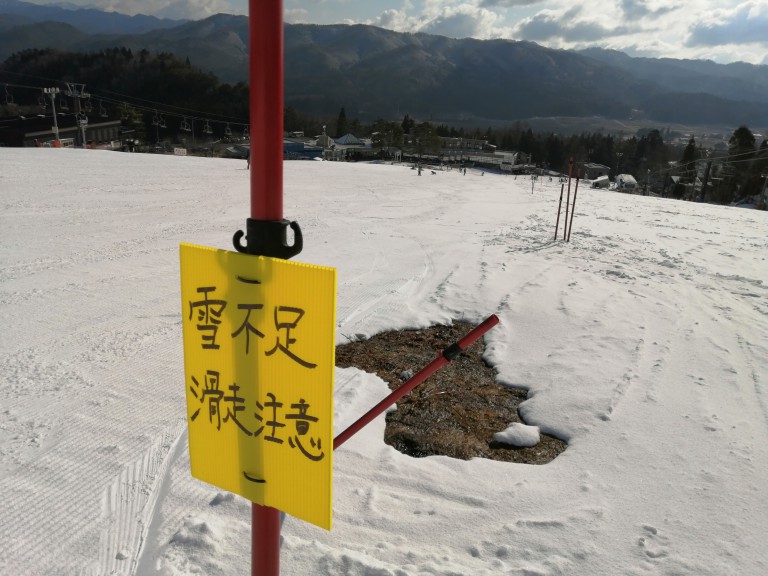 We promptly set panels around dangerous areas to raise awareness. Toomi Slope was full of them, like the one in the picture.
Snow quickly turned into a slushy and speed snatching snow. For those who are able to ski the way they want in this snow can truly be called skilled. 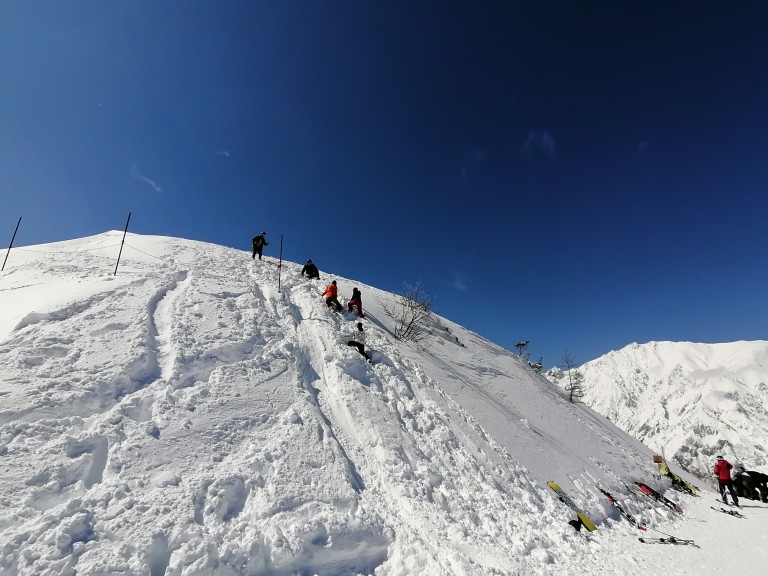 Now, lets look at the conditions at the top.

Perfect visibility! There are so many people attempting the climb to the Jizo! Its a wonderful thing to be young. When climbing up, there are some people sliding down the steep decline on their butts, there are rocks and your feet can easy sink deep into the snow, so please be careful of the many dangers on your journey to and from the Jizo. Please make sure not to get tunnel vision due to having too much fun climbing! 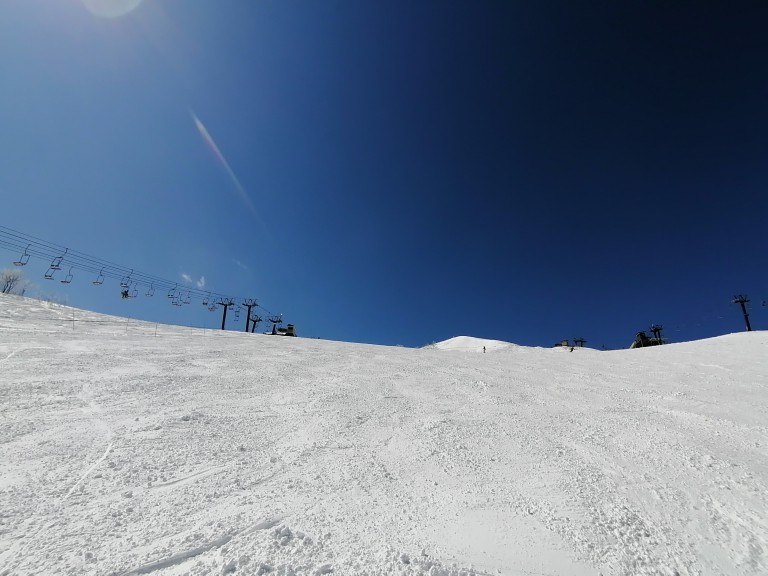 The Grand Prix course is still perfectly white, but please be careful of the earth and rocks that are starting to appear around the Dynamic course. Please make sure to control your speed as well! 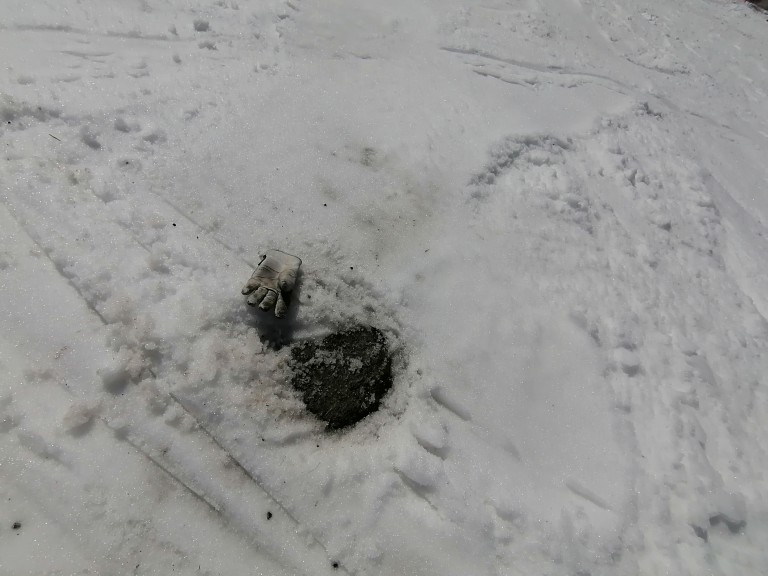 There are rocks like this appearing here and there. I picked up 4.5 rocks today, but as I hold no sentiment for rocks, I sent them on their way down the valley bottom. 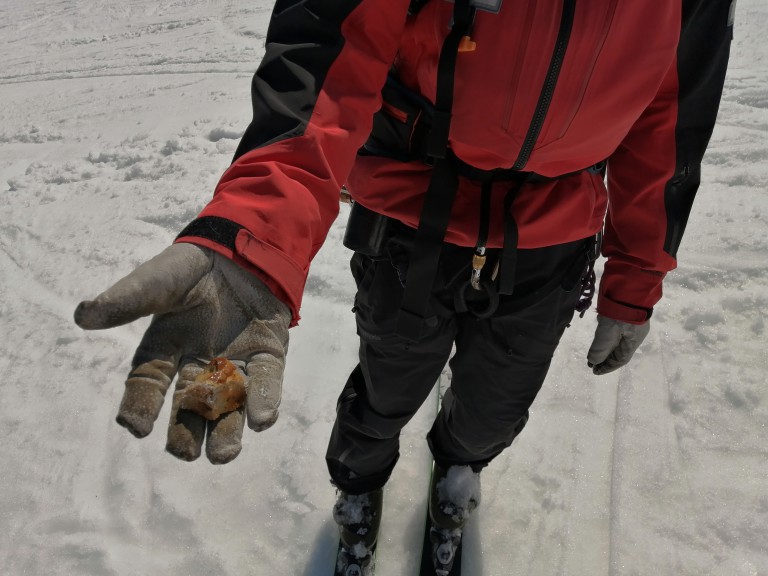 At that time, Mr. @de showed me a rock that he had found.

“Nothing, just thought that this rock has a different colour from the rest, so its pretty.”

“You can add it to your collection if you want.”

I sent your pretty stone on its way to the valley bottom 10 seconds later. I’m sorry.

Mr. @de is quite strong, he climbs very high mountains in Summer. He is one of the people I look up to. I was frustrated since this morning when I learned that the climbing gym I was supposed to go to during my next day off closed because of the corona virus. Taking care of one’s physical condition is very important after all. 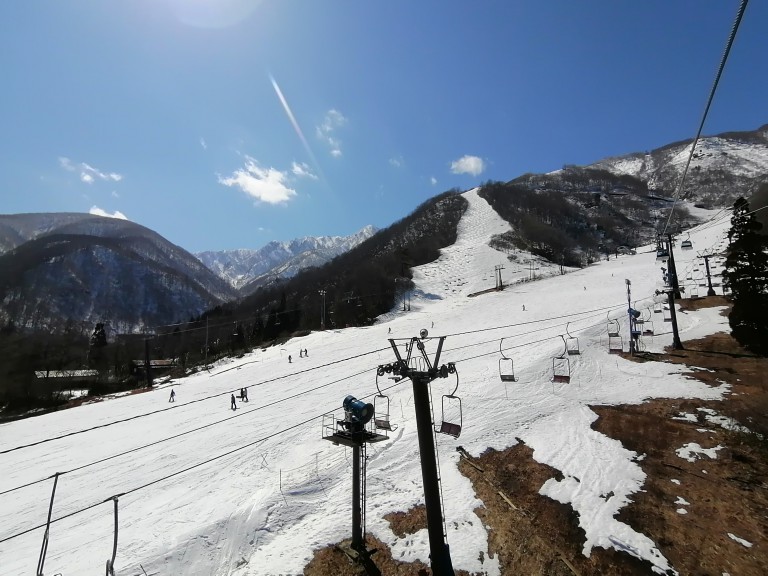 After noon, the slopes returned to normal. Please ski with caution, as always. 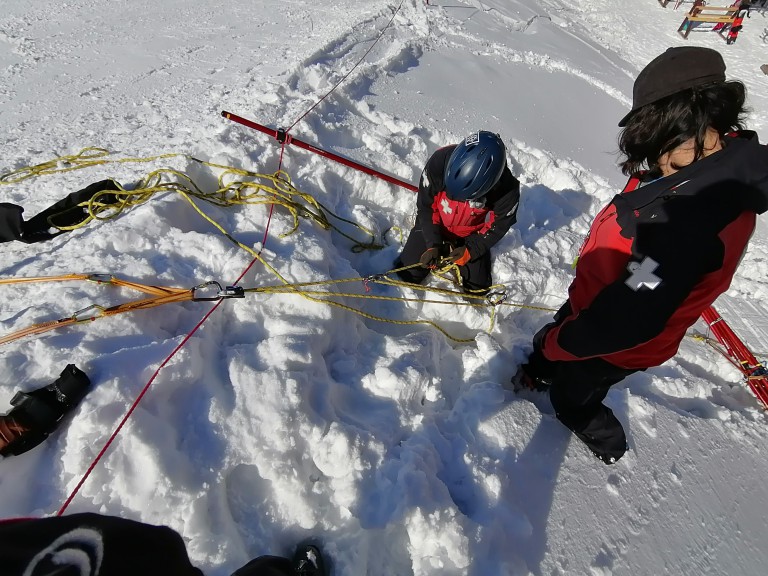 In the afternoon, we performed rescue simulation under Kanreki’s mentorship . He is also a mountain expert. As he forgot his gear, he skied down the mountain to pick it up and climbed up again in a blink of an eye. Hats off to him. 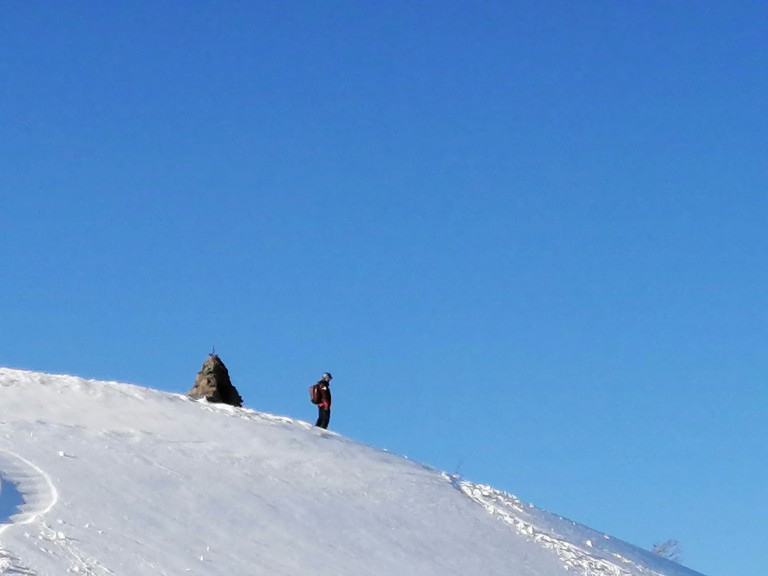 This weekend, two cold waves are to be expected, but will it be consistently snowing? Anyway, let’s not regret it and enjoy the ski season until the very end!