Good evening everyone! It’s been a while~ its Hatchaku here!

The weather today is great! 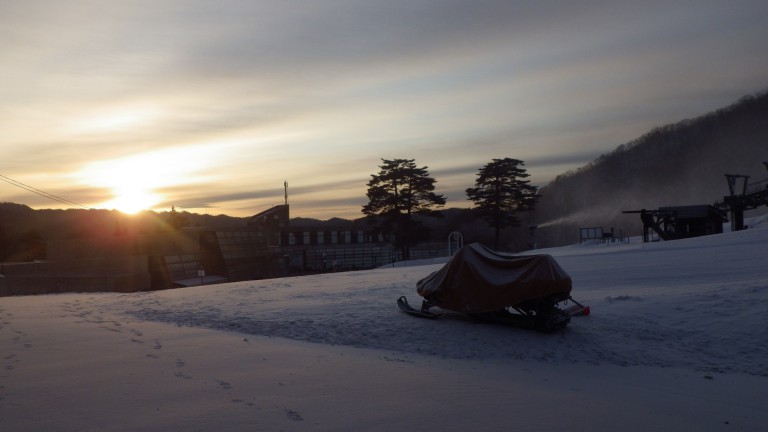 The snowfall squad (those in charge of the snow machines) are in full operation!

In order to preserve the accumulated snow in front of the gondola, the snowfall squad turned on the snow machines and took aim at the gondola station midway through the nighter session the previous evening.

Just what kind of work times do the snowfall squad have to work??

Well, if we weren’t here, then it might not have been possible to ski on the slopes this year.

We are the backstage heroes!

As usual, the Alps Daira slopes have been professionally groomed!

This slope! There is no mistaking it. 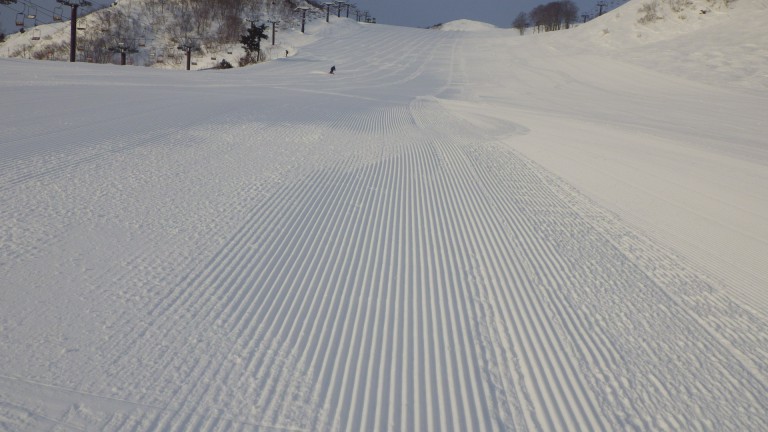 And as its a weekday, it has been quite a pleasant morning.

Its just been so fine from the first descent this morning! 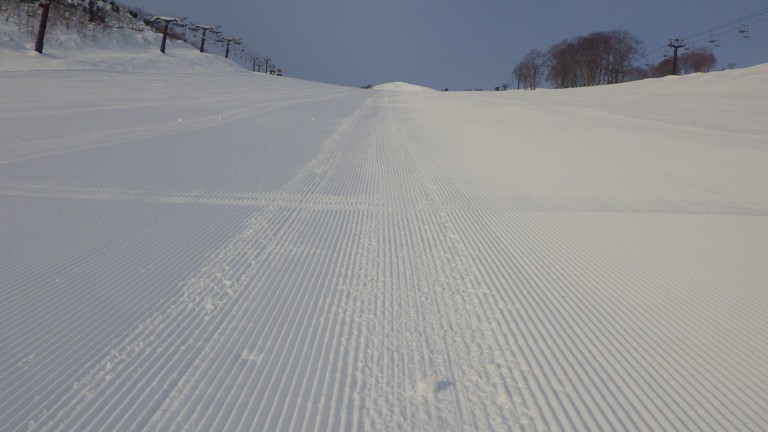 Using the snow mound above as a point of reference, it seems like two different snow grooming machines have passed through on the left and right sides. If you look closely, you can indeed see that there is a difference.

I implore everyone to come first thing in the morning to see, slide and feel the Grand Prix course, and decide for yourselves where is best!

This is only a view that people who come first thing in the morning get to see, so please come as early as possible!!

Just to make sure you know, the Gondola first opens at 8:15AM.

And this is the everyday set up of the course border nets! 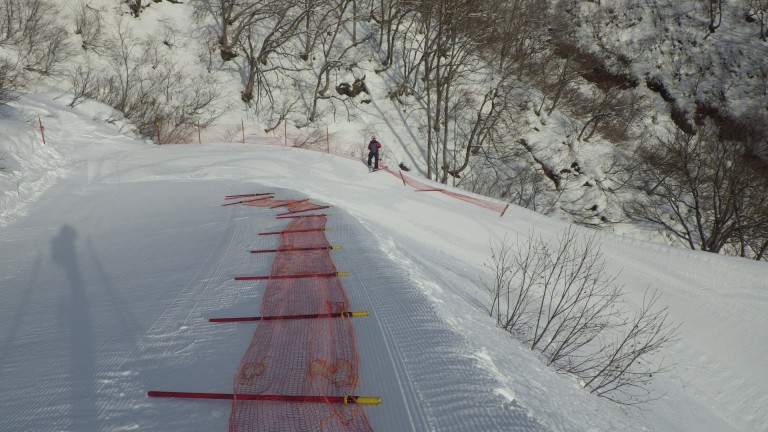 Last year, I would often struggle with tangled nets, but it seems that this year, there isn’t too much of a problem.

I don’t know if its because I have little to no sense with this kind of thing, but one thing for sure is that this year’s newbies are very sharp!

I was able to work up a good sweat this morning.

When I rode the Alps 1st pair lift for my first patrol and arrived at the top, to my surprise, there was a new path! 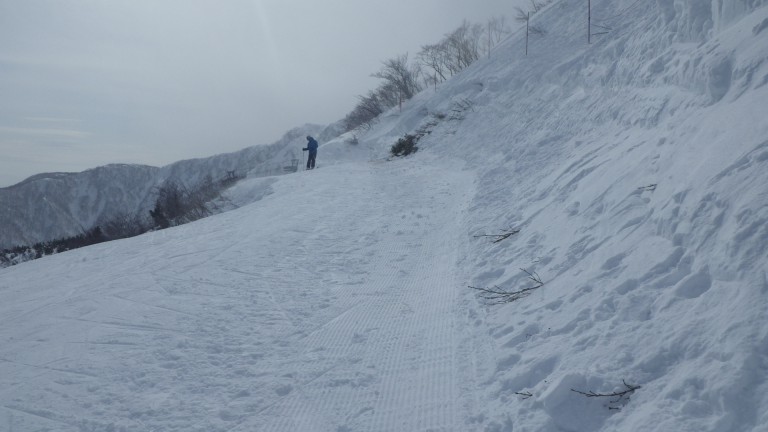 When following the path, wondering where it led, I ended up at…… 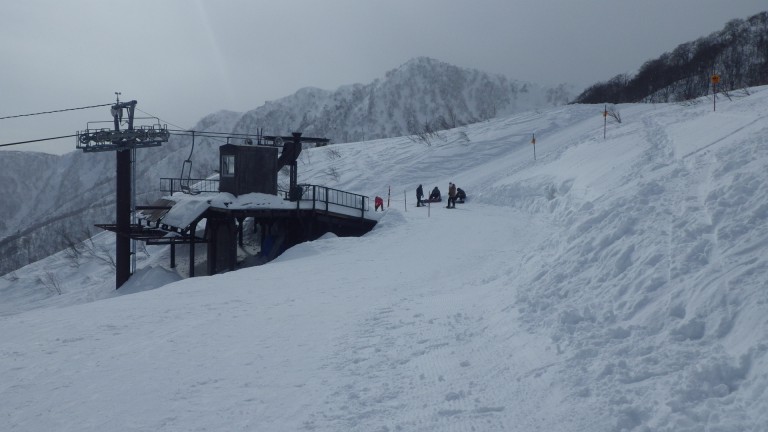 …the top of the Alps 4th chairlift!

We couldn’t make it before due to the lack of snow, but due to the efforts of the snowfall squad we were finally able to make it.

I believe that this path will be of great convenience to those attempting to hike up the mountain.

The mountain scenery on a clear day is a sight to behold, so I strongly recommend hiking to the top for those interested.

Around the afternoon, there was a bit of wind so the snow started to dance.

From there, the wind grew gradually stronger until some lifts had to be momentarily stopped.

There were times where the snowfall increased in intensity and I thought “Hell Yeah!!”, but it ended up being blown away by the wind…

After that, the wind subsided, and the snow ended up falling peacefully upon the mountainside.

When I went to the top of the Alps 4th chairlift, and @PINKY was at Jizo Peak waving at me. 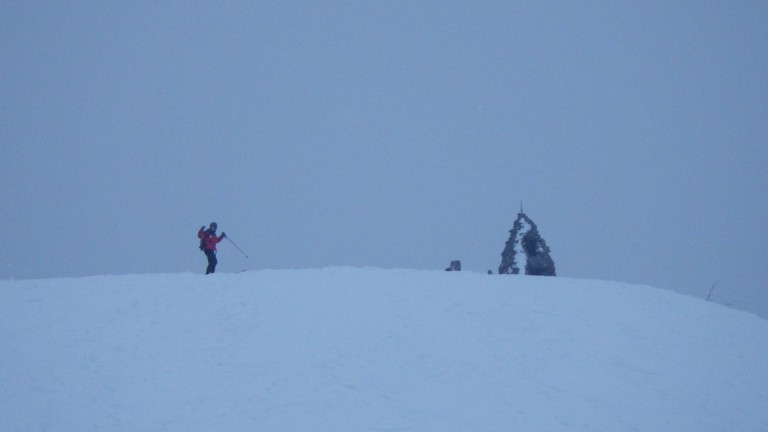 What a wonderful feeling!

After that, he rang the Jizo’s bell and put his hands together in prayer.

It was a sight that brought a smile to my face. 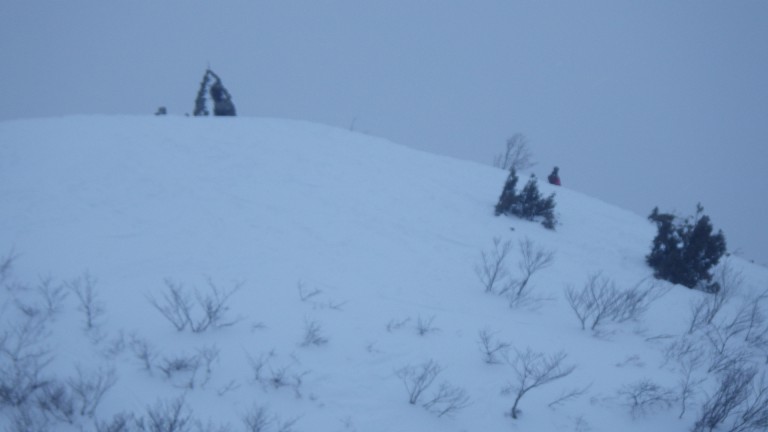